Lawyering on Grounds of General Intelligence

My next novel (which as rodeo announcers say is, “in the chute,”) is a frontier lawyer mystery whodunit.  Without giving away the plot, let me give away part of the plot.

Most westerns feature the cowboy as the self-reliant loner who comes along in time to save a town from marauding outlaws, like Shane with no first name but who attracts the eye of the mom and becomes a hero to her boy when he fan-fires a colt revolver with uncanny accuracy.  Who wouldn’t want a buddy like that!

Or you get a Jimmy Stewart character who rides his law training into a long career as a U. S. Senator on the back of having mistakenly been cheered as the man who shot Liberty Valance.

Actually, lawyers on the frontier were similar to cowboys.  Some even carried pistols.  In the 1890s in Marquette, Kansas a local lawyer was accused of “bill collecting by pistol”, waving a pistol in the debtor’s face to convince him to pay up.  The lawyer was told by the Supreme Court that was not nice.

Lawyers could be loners too.  Most practiced law by themselves. There were no mega firms on the frontier.  A two-person firm was a big firm.  Rarely did they ask colleagues for opinions on how to try a case or to get certain evidence into the case.  They had to learn how to try cases by watching others and seeing what seemed to work.

Very few had a formal legal educations.  Unlike today, there were few law schools.  Many “read law,” that is, they clerked in offices of prominent lawyers until they learned enough law to go out on their own.

Judges were all over the lot.  Many were laymen, like Judge Roy Bean.  Those who were lawyers often were not the best lawyers.  Judges were appointed– usually by the President or the Governor.   Mark Delahay came to Kansas as a publisher in Leavenworth before the civil war, but eventually was nominated for the federal bench by Lincoln.  A grumpy rival publisher wrote the only bench Delahay was suited for was one with two holes in it.  He was probably right.  Delahay was impeached by the U S Senate in 1873 for “exceptional drunkenness.” 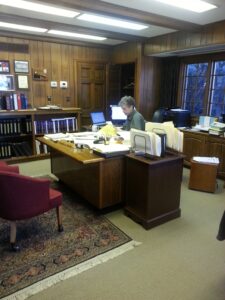 Frontier lawyers had different degrees of ability.  General W. T. Sherman, before the civil war, was briefly a lawyer in Leavenworth, Kansas.  He called himself a lawyer, although some would say he was more of a bill collector.  Lawyers, to practice, had to be on the approved list of attorneys of each local judges.  Arriving in Leavenworth, Sherman asked Judge Samuel Lecompte to put him on the judge’s list but when asked, Sherman had to admit he had not clerked for anyone important, nor attended any law school.  All Sherman had done was review Blackstone’s Commentaries while as a bored young 2nd Lt. stationed in Florida in the 1840s.  Judge Lecompte admitted Sherman to the bar “on grounds of general intelligence.”

Modern lawsuits take years to get to trial because of the interrogatories and depositions that get taken all over the country.  There was none of that on the prairie.  Trials were seat of the pants operations, “trial by ambush” the norm.  Litigants exchanged bills of particulars – formal statements of facts surrounding the litigation.  Litigants brought their witnesses to court and put them on, questioned them, then summed up the evidence to the judge who, hopefully had remained awake.

What lawyers did need was a mind that was quick, and a basic knowledge of the law.  Obviously, those requirements separated the wheat from the chaff.

When my new book comes out, hope you’ll give it a glance.